I first read Mistborn: The Final Empire by Brandon Sanderson in December 2015. This review, however, was written when I reread it in November 2017, and was originally posted on my Goodreads account. 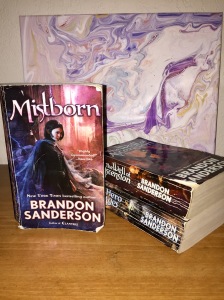 Where to begin this review?! I loved everything! I suppose I could start with the impeccable world-building, or with the stellar characters, or with the exciting plot. or with the plot twists, the humor, the drama, the setting, the writing in general. There are just so many fantastic things in this book. I could talk about it for hours.

But I have to talk specifically about the magic system. It’s incredible. Sanderson has made a magic (called Allomancy) unlike anything I have ever seen before. Learning it could easily have been dry and technical, but no. We learn it alongside the protagonist, and each new bit of knowledge is presented in a clever engaging way. Each lesson builds on the previous and advances the plot at the same time, and it is not boring whatsoever. I cannot imagine how difficult this was to write, but it is SO rewarding to read. Sanderson is a brilliant storyteller.

And the characters! I enjoyed Vin’s journey through this book, and I adored Kelsier, Sazed, and Elend. The whole crew is a delightful bunch, though. Even the Lord Ruler was fascinating, and he had such depth; he is not your typical despotic, maniacal dictator of many fantasy worlds. There is more to him, and that shows. And the characters – while there is so much else to commend this book and author for, they are what truly make this story something special. They feel real.

In short, this book is spectacular, and you NEED to read it.