I first read The Black Elfstone in June 2017. This review was originally posted on my Goodreads account. Some minor edits have been made to this review. 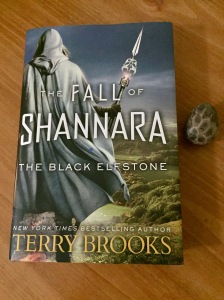 The Black Elfstone, the first book of The Fall of Shannara by Terry Brooks, is much, much better than Brooks’ previous trilogy (the decidedly flawed though honestly attempted Defenders of Shannara books). With the Shannara series winding down, there is a lot of nostalgia attached to this book, so fans of Brooks will appreciate it — perhaps more than recent fans. (Wow, that’s a rather hipster thing to say isn’t it? Oops.)

Still, this story is engaging, the main three characters (though very archetypal) are sympathetic and have good dynamics with one another. Parts I was able to see coming, though that could be coming from my knowledge of the world of Shannara rather than Books making obvious narrative choices, so this might not be a bad thing. The things I did not see coming (such as Tavo, a character I was utterly unprepared for) made up for it.

Speaking of characters, while Dar Leah is a near-exact replica of his predecessor Paxon Leah, fulfills the role the narrative requires of him. The same goes for Drisker Arc, whom fans surely cannot avoid comparing to Allanon – the Druid all Druids aspire to be. Still, it was Drisker’s bond with Dar and Tarsha that made me invested in his story more than anything else about him and his Allanon-iness. I wish Brooks could write more than the same three characters, but I can’t do much about that.

The best character to me, however, is neither of these men. After the disappointing female characters of the Defenders trilogy (Chrysallin and Leofur), seeing the headstrong, talented, yet still not fully grown into herself Tarsha Kaynin was a refreshing experience. She recalls previous Shannara women like Amberle, Wren, and even Nest Freemark, without being an exact copy. I could see how some might find her a bit annoying, but as I see it, she knows what she wants and is determined and resourceful in her attempts to achieve those ambitions, even if her decisions are perhaps not the most wise. I also appreciate that she is not confident and opinionated all the time, but rather still has doubts and concerns about her magic and her life.

This is a must-read for fans of Brooks, and I would not be surprised if it creates many new fans as well. Now if only I didn’t have to wait for next June to read the next book…