I first read Alexander Hamilton by Ron Chernow in November 2017. This review was originally posted on my Goodreads account at that time. Minor edits have been made before posting here. 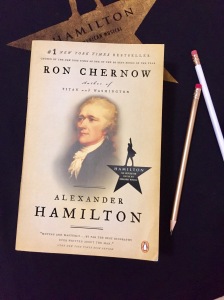 As a former history minor (and yes, also as a fan of the musical Hamilton), this book was a great read for me. Chernow did extensive research, which is obvious in every line. He provides incredible details and quotes, telling Hamilton’s life from his childhood in the Caribbean to the end of his life in New England and all the drama that happened in between. What I liked most is that he’s fair and as un-biased as he can be, especially in the parts about Hamilton’s feuds with John Adams, Thomas Jefferson, and – of course – Aaron Burr. Chernow makes it intensely clear that the founders of the United States were just people, with flaws, internalized prejudices, and strong opinions, not superhumans, which is a valuable and important thing to realize.

Sometimes this book sounds more like narrative than biography, and all the complex, sometimes contradictory, elements of Hamilton’s personality are fleshed out on every page. The chapter “Fatal Errand” especially stands out in my memory, with Chernow using firsthand accounts to shape a vivid chapter that reads like a poignant, dramatic, and almost cinematic scene. But really, every chapter is a success. Writing about the life of someone so brilliant and prolific would have been a tall order, but Chernow has pulled it off. Overall, this is an insightful, engaging, and relevant work. This is a lengthy tome, coming in about over 800 pages, so this will likely not be for everyone. However, those interested in the American Revolution, early US history, or in Hamilton himself will likely enjoy this.

Also, Eliza Schuyler Hamilton was a fantastic person. She gets five stars.