I first read The 7 1/2 Deaths of Evelyn Hardcastle by Stuart Turton in June 2018, and this review was originally posted on my Goodreads account then. Some minor edits have been made to this review. 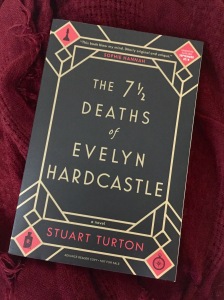 (I got an advance reader’s copy of this, as when I read it, it had not been released in the US yet. Therefore I will not quote directly from this book, just comment in general.)

Especially for a debut novelist, this is an ambitious, impressive book. Set in a beautiful but ominous setting, filled with characters you might find in an Agatha Christie novel, this story already has a good set-up. In short, a man named Aidan Bishop is tasked with solving the murder of Evelyn Hardcastle over the course of eight days. The twist? The day of the murder is on repeat, and he wakes in the body of a different person at the Hardcastles’ estate each “new” morning in hopes that the hosts’ varying knowledge, connections, and skills will help the investigation. As the author described, this is a murder mystery with a Groundhog Day/Quantum Leap twist.

It’s an excellent idea, and lends itself to an extremely layered, complex plot, even for a murder mystery. I can’t imagine the notes and outlines that were necessary for planning this book! And the twists and turns of the story, as Bishop learns more and more, keep you constantly hooked. I didn’t ever feel bored!

However, a couple of things kept me from really loving this book. While it was a suspenseful, intriguing, twisty story, it also suffered a bit due to the characters. I was not all that invested in the murder victim; when we meet her, Evelyn does not seem that pleasant and made a comment or two that made me think she wasn’t a very nice person. Yet Bishop spends the rest of the book recalling that one conversation with her, recalling how kind and interesting and lovely she had been. I didn’t quite see that, which is where my initial disconnect from Bishop began.

At first, I chalked this up to the simple fact that this is first and foremost a murder mystery. When I read books in this genre, I’m there to see if I can unravel the puzzle of who the killer is and why they did it. So at first, I assumed this was a similar matter. But then, when we learn some things about an ally of Bishop’s, I realized there was more to what I was feeling than just the usual whodunit detachment. I didn’t, couldn’t, feel the same way or as much about this ally that Bishop does. If anything, I disliked her and wasn’t thrilled with where her arc was going. When I finished the book, I understood this problem further — Turton seems to have focused much more on the plot and the universe in which the characters exist than on making the audience feel attached to anyone. He clearly wants us to care, but fails in actually eliciting that emotional reaction — his relative inexperience showing through, I suppose. Because of this, I found the ending to be a bit lacking in fulfillment. The murder is solved, yes, but I feel overall the conclusion could have been handled a bit better.

In the end, I liked the storyline and execution of this concept. It’s an exciting book with some intense scenes and well-written lines. Just don’t expect overly fleshed-out, sympathetic main characters, or a fully satisfying ending.

If you’ve read 7 1/2 Deaths, let me know what you thought of the ending! Or, if you haven’t read it, what’s the best new mystery novel to you?